The inspiration for the Ferme Ornée garden at Larchill, in rural Ireland, is believed to have come directly  from the Prentices, a Quaker merchant family who owned the land which was to become Larchill within their estate of Phepotstown from the early 1700’s.  This was their country residence where they farmed flax for the production of linen, a highly prized fabric of the time.

The Prentice family had trading connections throughout Europe and would have been aware of the new fashion in garden design.  In particular the famous gardens of Leasowes and Woburn Farm in England.  In Ireland the Prentice’s townhouse was adjacent to the home of Dean Swift in Dublin where he had developed his orchard and garden, ‘Naboth’s Vineyard.  Dean Swift and his great friend Mrs Delaney (known today for her exquisite floral collages) were most closely associated in Ireland with knowledge of the new movement in garden design.  Larchill was only 10 miles from Dangan Castle, often visited by Mrs Delaney,  where from 1730 an extravagant 600 acres of land was embellished  with a 26 acre lake, temples, statuary, obelisks and grottos by Richard Wellesley, Earl of Mornington and Grandfather of the Duke of Wellington.  This is entirely contemporary with the Prentice’s period of garden development on their estate.

Thus there were many sources of reference for the Prentice family as they  created their own pastoral paradise before falling on hard times and bankruptcy due to failure in their trading enterprises.  The Ferme Ornée gardens were, as a result, leased separately from Phepotstown House and became known as Larchill after a boundary of Larch trees was planted around the farm and garden in the early 1800’s. 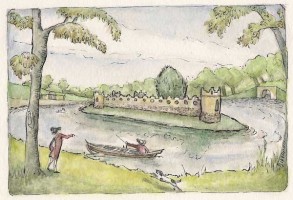 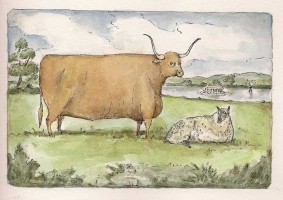